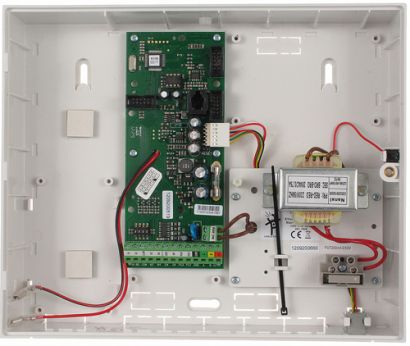 The Jablotron JA-82K is a basic configuration of the OASiS control panel (size: 255x215x75mm).

The JA-82K is a basic configuration of the JA-82K control panel. The JA 82K main board provides building-block-like modularity which allows functional extensions to be made by simply plugging-in the required modules. The basic JA-82K provides 4 wired inputs.

Section splitting
Connected devices can be assigned to 3 sections: A, B or C. Assignment to a section has its effect when partial setting is used e.g. only A is set, AB is set, or ABC is set (which, for example, would be suitable for homes where A could mean afternoon setting, AB night setting and ABC total setting), or if the system was split into two independent partitions A and B, with a common section C. In the second case, each A or B section can be set individually, and C is automatically set when both A and B have been set by users. This would be suitable for two independent families in a single house, or two companies in one building.

Programming
Programming the system is possible by OASiS keypads such as the wireless JA-80F or the hard-wired JA-80E, and also by computers running OLink software (with the JA-82T cable). Programming with the software is by far the most easy and organised option. Further options offer programming by mobile phone or the internet.
To connect a hard-wired keypad or a computer, the control panel is equipped with a digital bus provided by terminals and RJ connectors.

Outputs
The control panel has two alarm outputs: IW = internal (indoor) warning and EW = external (outdoor) warning. Both these signals are also available as wireless signals. There are also two programmable outputs in the control panel, PGX and PGY whose functions can be configured. The PG outputs are not only available as physical control-panel terminals, but also as radio signals for the control of UC and AC receiver outputs.

Note:
- The communication modules can be used in combination except for the communicators where only the JA-80V and the JA-80X can be plugged in simultaneously.
- PGx and PGy can also be used wired (12v) for a siren or control relay.
- There is space for a 12V, 2.2 Ah back-up battery, not included.