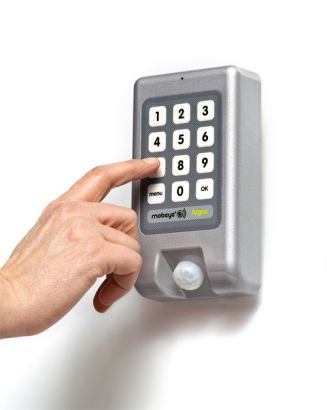 The Mobeye Argos i200 is the 'big brother' of the successful Mobeye i110, discover the many possibilities.

The Mobeye Argos detects a burglary at an early stage and warns contact persons. As soon as the motion detector sees movements, a telephone notification follows. The internal siren deters the burglar. A silent alarm is also possible to catch the burglar in the act.

Place it anywhere and switch it on

Due to its simplicity, the Mobeye Argos is understandable for everyone. In addition to the burglary function, it also alarms at temperature limits. Applicable as a frost guard in vacant buildings.

The compact Mobeye Argos provides complete burglary protection and leaves no burglaruntouched. Intended to secure your belongings. In the event of an alarm, it calls the contacts and/or sends an SMS text message. Via the built-in microphone you can listen to the sounds on the spot with your phone. In this way the burglar alarm can be verified.

Full alarm system with many features

Despite its small size, the Mobeye Argos has all the features for complete security:

Switching on and off is done by entering a 4-digit code, followed by “OK”. After switching on, you have one minute to leave the room. An exit indication will sound during the exit time. After this the passive infrared motion detector sees whether someone enters the room. The system can be disarmed within the entry time. Optionally, an entry indication sounds, a small LED lights up, or there is no indication. Switching on and off can also be done automatically. Time schedules ensure that the system is turned on at the right time, even if you forgot to arm manually.

You can program in the settings via the keypad. Or you prepare the settings in the Mobeye Internet Portal and have them retrieved by the device. The Mobeye Portal with Mobeye SIM card offers security benefits, additional functions and a complete dashboard. Read more.

The Mobeye Argos works autonomously and fully battery powered. This means it can be placed anywhere without installation work. Even with a daily alarm or test report, it works for more than a year on a set of batteries. As soon as these need to be replaced, the administrator will be notified. Alternatively, connect the Mobeye Argos to an external power supply. This allows to do actions from remote, such as switching on and off, programming, operating the outputs and the batteries will last longer. A message follows in the event of a power failure. After sending the power failure report, the GSM module goes into “low power” mode and continues to work on the batteries. As soon as the voltage is back, it sends a “power recovery” message and the GSM module remains open.

The internal temperature sensor monitors a min. or max. temperature limit. These are adjustable between -10 °C and +50 °C. If it gets too cold or too hot, an alarm message will be sent which states the temperature. The temperature alarm can be used separately from the burglary function. If only temperature monitoring is required, we recommend a Mobeye temperatur monitors.

The Mobeye Argos has two potential-free inputs for wired sensors. When an input is activated, an alarm follows. The inputs are adjustable with alarm delay times, alarm repeat times, own alarm texts, etc. It is even possible to disable the internal PIR and monitor only the external sensors. You connect a magnetic contact, a water float, extra PIR or any other NO / NC contact to the extra inputs. The Mobeye Argos has two relay outputs. One of these is configured as a siren output. An external siren can be connected (with its own power supply) to increase the alarm impact. You can control any device with the other output. This happens automatically after an alarm, when switching on or off, or – when using external voltage – remotely via SMS command. The maximum load is 2A/30V per output.