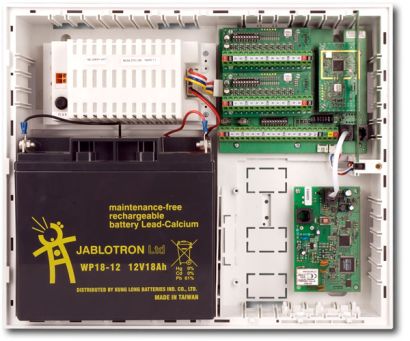 The Jablotron JA-83K control panel is a modular unit. The heart of the unit is the JA-83K main board with 10 wired inputs (up to 30 using three JA-82C modules).

The JA-83K is a supercharged version of the JA-82K with a much larger housing, and the possibility of expanding the number of wired inputs from 10 up to 30 using JA-82C expander units. Adding a JA-82R module allows you to wirelessly connect up to 50 detectors and other devices. The bigger housing can accommodate a huge backup battery up to a capacity of 18 Ah. The JA-83K main board provides building-block-like modularity which allows functional extensions to be made by simply plugging-in the required modules.

The following additional modules can be plugged into this board:
* JA-82R – a radio module which makes it possible to enrol up to 50 wireless devices of the JA-8x and RC-8x range to the control panel (detectors, remote controls, keypads, sirens or thermostats).
* JA-82C – an extension module which provides 10 additional wired inputs, thus extending the total capacity to 20 (or 30 as the case may be) wired inputs. One or two modules can be used.
A communicator can also be used with the control panel:
* JA-8xY – a GSM communicator which the control panel uses for transmitting alarm reports to the user and which communicates with the ARC (alarm receiving centre) via the GSM band. It also enables remote access via a phone keypad or system administration via the GSMLink website.
* JA-80V – a LAN (Ethernet) computer network communicator combined with a phone-line communicator. It allows communication with the ARC via LAN and transmission of reports via a telephone line. It also enables system administration via the GSMLink application.
* JA-80X – a phone-line communicator which is able to communicate with an ARC and which allows voice-reporting to the user pursuant to the type of alarm. This module can be used in combination with a JA-80Y – a GSM phone-line backup.
* JA-80Q – in the case of using a PIR detector with a camera. The JA-68 outputs module can also be used with the control panel – e.g. to provide a link to the transmitter for communication with the surveillance centre.

By assigning connected devices to the A, B or C sections the system can be configured for partial setting or it can be split for use by two independent neighbours. The control panel provides 2 programmable outputs. Code/card operation allows up to 50 codes/cards to be recognised. To connect a hard-wired keypad or a computer, the control panel is equipped with a digital bus provided by terminals and RJ connectors. The system is mains-powered and can be backed up by a battery with a capacity up to 18 Ah (not included). The event memory stores the last 255 events. The internal clock provides an automatic summer time offset. The JA-82R radio module makes it possible for up to 50 wireless devices to be enrolled (detectors, remote controls, keypads, sirens or thermostats). The PG outputs are not only available as physical control-panel terminals, but also as radio signals for the control of UC and AC receiver outputs. Using the JA-83K modularity, any of the JA 80X, JA-80Y or JA-80V communicators can be plugged in as optional modules.

* The JA-68 outputs module can also be used with the control panel – e.g. to provide a link to the transmitter for communication with the surveillance centre.