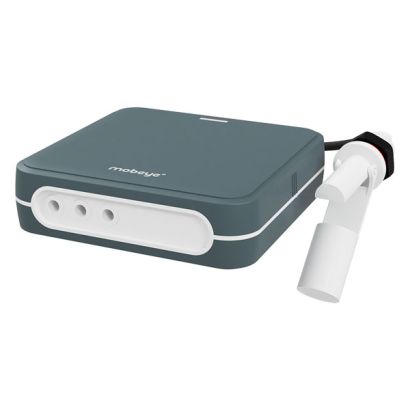 The Mobeye CM4300-FS WaterGuard sensor detects water and sends an alert to the preset telephone numbers.

Using the float sensor, the Mobeye WaterGuard-FS monitors the water level in a tank, basin, or pool. A second float sensor can be used to monitor a second water level. Fully battery-powered or on external power. If an external power source is used and a power outage occurs, it also sends a power failure message.

The water float sensor has a moving part that moves up and down due to rising or falling water. Internally it has a magnetic contact (“reed contact”). The water level opens or closes the float. The float is installed horizontally, preferably with the hanging part down. If there is no suitable wall to fix the float, a stainless steel support lath (with hole) may help.
For detecting water leaks, we recommend the CM4300 (version with a leak sensor).

Alarm messages
In the event of an an alarm, the Mobeye WaterGuard-FS sends alarm notifications by app (IOS/Android), telephone call (voice message), text message and/or e-mail. The message includes the actual temperature. For the push messages there is a choice between an escalation plan or group message. With the escalation plan, the recipient can confirm the push message, so that the other contacts no longer receive the message. If none of the recipients confirms the push message, a call, SMS and/or e-mail will still be sent out. The number of contacts is unlimited.

External voltage vs battery powered
The Mobeye WaterGuard-FS can run on batteries for a long time which makes it independent of an external power source. Optionally, a mains adapter is connected (12-24V DC). In this case, the power supply is also monitored. If there is outage, a message will be sent. The internal batteries ensure that the alarm device continues to work for a long time. The WaterGuard-FS will continue to monitor the water level and input contacts and will still report alarms. Once the power restores a notification will be sent.

Potential-free alarm inputs
In addition to the level sensor, the Mobeye WaterGuard-FS (CM4300FS) has a second NO/NC input for connecting an alarm contact or sensor. This is meant to monitor a second float, or the status of a device, such as a water pump.

Network and SIM card
The Mobeye SIM card gives the device full functionality, including the use of the Mobeye Internet Portal and the app. With the Mobeye SIM card, communication takes place over the 4G LTE-M network with 2G as fallback.
When you insert your own SIM card, the device works on 2G. Alarm messages are then sent via SMS and/or call to max. 5 telephone numbers.